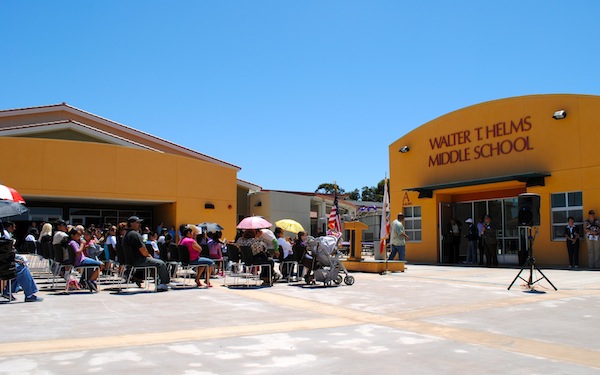 The community gathers at the open house event before touring the facilities of the new Helms Middle School.

While a band of mariachis played in front of the new Walter T. Helms Middle School, some teachers, city officials, parents and children were lining up to get meat and frijoles at a buffet. Others were touring the brand new campus under a cloudless blue sky.

This Saturday, the Contra Costa Unified School District invited the community to an open house showcasing the new campus of Helms, the only middle school in San Pablo. The 140,000 square foot facility had been under construction for almost three years next to the old facility and it will be ready for the kids in the fall. 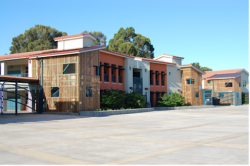 “We invited the community to see what all the traffic, dust and noise were about,” said Bill Fay, Chief Operations Officer, who was responsible of the construction. Fay said that the old campus was built fifty to sixty years ago — the electrical system was old, the roof needed repair and there was no infrastructure for computers.Now at the Helms Middle School all classrooms and offices are fully wired for Internet access. There are three computer labs and a computer lab area in the library. The school includes “Green Schools” elements such as lighting efficient controls and a storm water treatment system.

For the first time the community was invited to tour around the facilities. “It’s very important for me to know the place where my kids are coming to school,” said Richmond resident Xiomara Diaz, the mother of 11-year old twins William and Walter.

Security is an issue that concerns many parents. “I like the fact that there are going to be security cameras because they are going to be checking out what the kids are doing,” said Paula Soltero, whose child will attend the school this fall. The school will also have a full surveillance camera system that the San Pablo Police Department will be able to access via a web-based coordination system.

Brian Tibbot, the school’s life science teacher who was attending the event, said that his students were eager to leave the old campus and would regularly ask him during the school year, “When are we moving?”

“In this new school there are way more things to do, like a big gym, basketball court, auditorium and even a dance room,” said 12-year-old Yomani Mapp. The school includes a multi-purpose room that has a stage for events and performances, and a full-service kitchen, with interior speed line system for service and multiple snack bar locations.“It’s clean and it looks new, ” said 11-year-old Jonathan Dueñas after looking at the facilities.

Jorge Flores, father of a 13-year-old student, said he hopes everyone will make a collective effort to take care of the school and keep it new. “We hope that the kids, feeling more secure and motivated, will try harder,” said Flores.

The Measure J Bond, approved by voters in 2005, provided the $70 million needed to rebuild the school, including $54 million for the main campus and $16 million for demolition of the old campus and new field construction. The old school building is currently standing, but the last step for completing the new campus will to demolish it and build an integrated recreation area that can be used by the community.

Like many Richmond middle schoolers, Katie Hueso went to Helms. Now a Richmond High senior, she visited the new campus on Saturday with her family. Her little sister Nancy will come to Helms in August. Katie said that she liked the new facilities a lot. “In the old school you couldn’t even go to the bathrooms—they didn’t even have doors and there was no privacy. Here everything is new,” she said.